My great grandmother was Mary Elizabeth Elliott. A research goal is to discover and identify her father.

She was born in 1909, and the State of Kansas did not require Birth Certificates until 1911. So I look at other documents for clues and piece them together.

Marriage license for Mary Elliot and Howard Reed is below.

Their first child was my grandmother, Thelma Reed, also born in Chautauqua County, Kansas. Mary and Howard later divorced, after a few more children. The divorce record has not yet been located. The marriage license does not state her location of birth for either bride or groom. The marriage license does name the mother, as the bride was 16 years of age at the time of the wedding. The father is not named.

After the divorce from Howard Reed, Mary  remarried a J. H. Boyd, called Jim Boyd in other documents, in New Mexico, on 17 July 1936. That document does state the place of birth for bride and groom. The bride was born in Inka, Kansas in 1909. This date of birth is consistent with other documents. There is no Inka, Kansas, but there is a town called Iuka in Pratt County. This document was typed, so a county clerk of some sort may have mistyped. I have been going on the idea of Iuka, Kansas for a long time, but finding no records.

The Boyd-Mary Reed marriage license is below.

Jim Boyd died in January 1939. Mary later remarried, this time to a Howard Clark, in August 1939, in Colorado. Marriage license for Mary and Howard Clark below.

Joseph Elliot does exist in the 1910 US Census with his family in Baca, Colorado.

I have done several searches for the father, Joseph Elliott, and cannot locate him with surety. Iuka, Kansas does have a local historical society, and they have done a search for me, and found nothing. Iuka does not have a Birth Register than I can find. Birth Certificates were not filed in Kansas until 1911, two years after Mary’s birth. I have a couple of records to indicate the father of Mary Elizabeth Elliott was Joseph D. Elliott, but I cannot locate him alone in other documents.

My next step was to locate the Social Security Application for Mary, which was filed in 1939. This application was completed in Del Norte, Colorado, the place of death for her second husband Jim Boyd. It was completed in July 1939, and Jim Boyd died in January of that year. This would have been after her second husband died and before she married her third husband, and was likely looking for work to support her children. 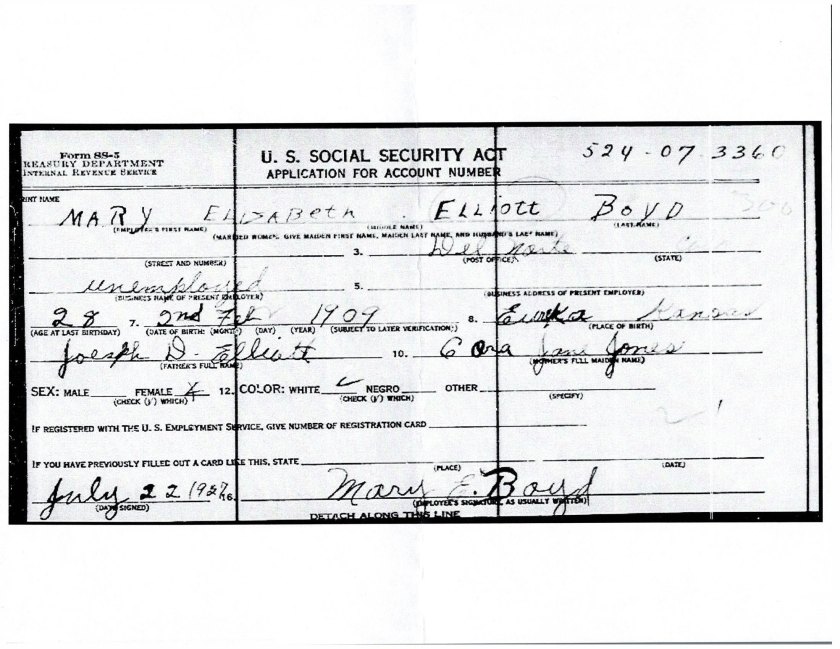 She still lists her father as Joseph D. Elliott, and her mother as Cora Jane Jones, and states her birth date as 2 Feb 1909, which is consistent with other records. However, the new information on this document is important; she states her birthplace as Eureka, Kansas. While Iuka and Eureka may sound similar, they are completely different towns. Iuka is in Pratt County, west of Wichita, and Eureka is in Greenwood County, east of Wichita.

Greenwood County does have a Birth Register online; this is like a large ledger book that lists the births of children, with the date and the names of the parents.

With a precursory quick look at the Register, I found no birth record for Mary Elizabeth Elliott, or a listing for either of her parents in the birth or marriage registers. I next need to do a longer, deeper search that takes more time, and looking at other dates both before and after the reported birth date.

I have a new location to continue the search! When something is found, I will post news here.